The Chesapeake has been faced with many problems having to do with pollution such as sewage, waste from food, and fishing materials. Some so small it is not visible to the eye but still is able to hurt our environment in big and small ways. But in the end it all adds and causes one huge problem and is not environmentally stable for us humans nor the animals and our atmosphere. This causes all types of problems. Pollution on the air has affected the water as well in other ways and plays into the problem in the bigger picture. People tend to notice the problem but do nothing about it, they tend to think other people will do it for them or it is not that bad or not affecting them. Overtime it gets worse and worse and will eventually affect them whether big or small, but by then it could be too late.

Air pollution affects each of the 17.7 million people who live in the Chesapeake Bay watershed. Pollutants floating in the air can also harm our land and water, encouraging the growth of harmful algae blooms that create oxygen-depleted dead zones in the Bay. Dead zones in the bay are areas where oxygen is very low. This condition of oxygen deficiency, is caused by an interaction between biological, chemical and physical factors. In the absence of abundant oxygen, animals and plants either die or leave the zone. Although these affected waters are called dead zones, many bacteria can thrive in this region, feeding on the abundant food made in the overlying waters. Overabundance of nitrogen contributes to the Bay’s “dead zones” and creates algae blooms which eventually block sunlight to underwater grasses and prevents their growth. This affects the people because the water can be what they use to water their plants and could be going into their tap water which could eventually end up in one’s body causing sicknesses.

There are three main components that feed into the starting process of the pollution: nitrogen, phosphorus, and sediments. Nitrogen occurs naturally in soil, animal waste, and in the atmosphere. However, most of the nitrogen delivered to the Bay comes from: Manure, emissions and chemical fertilizers from farmland operations, Nitrogen oxide emissions from sources including vehicles, industries and electric utilities, Human waste treated and discharged from municipal wastewater treatment plants and wastewater discharged from industrial facilities, Chemical fertilizers applied to lawns, golf courses and other developed lands, Septic systems that treat household wastewater and discharge effluent to groundwater in the Bay watershed. 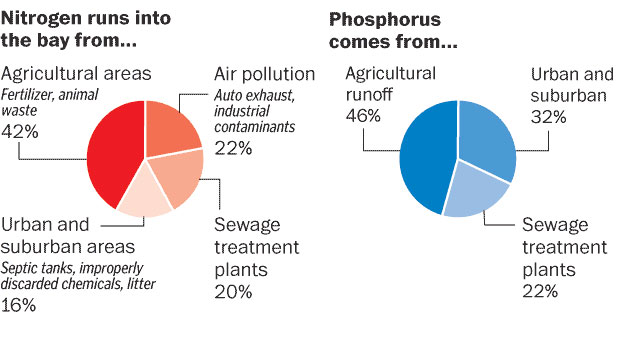 Sediment which plays a huge role in beginning process of the pollution of the Bay. It is made up of loose particles of sand, clay and silt. It is a natural part of the Chesapeake Bay, created by the abundance of rocks and soil. In large amounts, sediment churn up the waters of the Bay and its near by rivers and streams, harming the underwater grasses, fish and oysters as well as clams. Most of the sediment to the Bay comes from agriculture and farming near by. Natural sources, storm water runoff and erosion from streams make up the rest of the sources of sediment to the Bay and its local waterways. 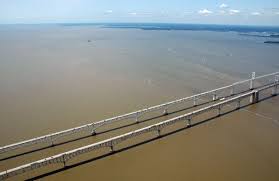 Not only is the the pollution in the Chesapeake affecting the people in the DMV area but what some do not realize is that the Chesapeake Bay Watershed is the largest estuary in the United States and the third largest in the world. The Chesapeake Bay watershed includes the entire District of Columbia, along with areas from six other states which include: Delaware, Maryland, New York, Pennsylvania, Virginia, and West Virginia. Nitrogen and phosphorus flowing in to the Chesapeake is a geographical water quality concern.Which means that if this problem is not fixed soon, the water we use 24/7 would soon go so bad it will not be usable.

There are small ways and steps that we as a whole could take to start fixing this problem. By getting just a few friends together and start collecting trash for a few hours is already starting to fix it. As seen on the island, there are beach cleanup boxes right next to the trash can, by bringing this to the Chesapeake Bay/Watershed I think it would encourage more people to take ten minutes out of there day to pick up the smallest of things.