Plastic is something us humans use a lot. Most people don’t know the effects of the plastics they are using and they don’t know where this plastic ends up. I have learned a lot about plastic pollution and how much it hurts the ocean. It was really special to be able help contribute to the cleaning and picking up of plastic at Kamilo beach. There are many things we could focus on when it comes to plastic debris, but I want to focus on what is causing the problem. We need to focus on how we can reduce plastic use so it doesn’t keep ending up in the oceans.

I live in Colorado and you might think well how can you help if your state is landlocked? Well there are a lot of things landlocked states can do to help prevent and reduce plastic use. You can do thing like buying in bulk, reusing plastic bags, ziplock bags, tupperware, reusing plastic bottle or getting reusable bottles. You can also do things like substituting things with plastic like bamboo, glass, wood, or even plastic that can decompose easier 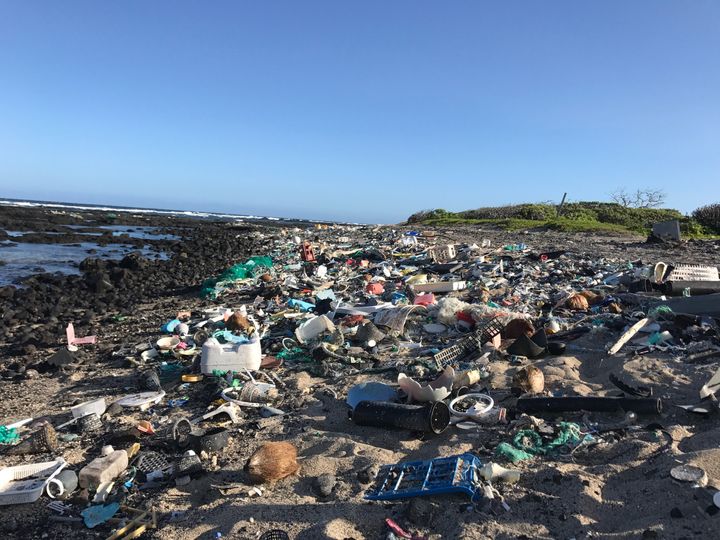 Plastic affects the whole ocean but I want to focus on the Hawaiian islands. It is home to some of the most beautiful beaches in the world but they are being ruined by plastic. The NOAA (National Oceanic and Atmospheric Administration) has been trying to keep the current parts of the ocean free of marine debris.The NOAA removed 57 tons of marine debris and plastic form the Hawaiian islands in 2014. Plastic pollution makes up almost half of Hawaii’s shorelines. This information was found when DLNR (Hawaii’s Department of Land & Natural Resources) created a survey that was conducted in 2015 through the months of August and November. The evidences shows we are doing something to help the oceans and it is working slowly but surely. But we need to be doing more.

Plastic debris affects almost every marine species. Whether its ingestion of plastics or its entanglement in nets, animals mistake plastic as food and they can’t digest it and if they eat enough they die. One thing I am helping do to help prevent this is reducing my use of grocery bags and using reusable ones. The reason it’s important to keep these plastic bags out of the ocean is because the baby turtles think that they are jellyfish and eat them. Plastic debris also affects a huge part of the marine bird population as well. Plastic ruins marine ecosystems and it is also bad for humans. In fact, not only do the toxins in plastic effect the ocean, animals ingest and soak up other toxins from outside sources before entering the ocean. As these chemicals are ingested by animals in the ocean you might think like how does the fact animals are ingesting all these chemicals affect us ? This does very much directly affect humans. We as humans ingest contaminated fish and mammals. So plastic pollution in the ocean and in the water in general is bad not only for the animals in the ocean but it also can harm humans.

The things that I will make a pledge to do for the rest of my life is never use another plastic water bottle that isn’t reusable. I also want to make a pledge to never use plastic straws and fast food places or at home. I also want to try to use tupperware to its full potential and not throw it away use it until it falls apart. I m also pledging too never use anther plastic bag at the store I will always bring reusable bags. These are reusable bags you can use at the store instead of using plastic bags.

When you help reduce plastic and help keep plastic out of the oceans it saves so many animals and it helps keep everything safer and healthier I suggest that if any of this interests you you reach out and see what you can do to help. It’s not too late to make an impact and do something in your area. I hope you learned something that made you want to help this problem.

Posted On July 17, 2017 ~ 2 Comments
By Gilbert NakayamaWhen visiting the Oregon coast during the Fourth of July years ago, I recall my astoundment when faced with the sheer amount of…

The way to REALLY clean up Port Washington

Posted On July 15, 2016 ~ 0 Comments
My name is Matthew, I live in the peninsula town of Port Washington New York and I have lived there my whole life but something…

Posted On July 15, 2016 ~ 0 Comments
As time continues on, the issue of food shortages and world hunger worsen. Especially in developing countries, it is imperative that they can grow and maintain…